The U.S. Environmental Protection Agency (EPA) has proposed a new update to its Cross-State Air Pollution Rule, or CSAPR (pronounced “Casper”), the program that regulates sulfur dioxide, ozone, and nitrogen oxide pollution from fossil-fired power plants and industrial sources. All three pollutants have well-documented detrimental impacts on public health, so reducing emissions can yield enormous benefits. EPA estimates that if the newest rule is finalized, the net public health and climate benefits—after accounting for the cost of compliance—will reach $15 billion each year from 2023 to 2040. 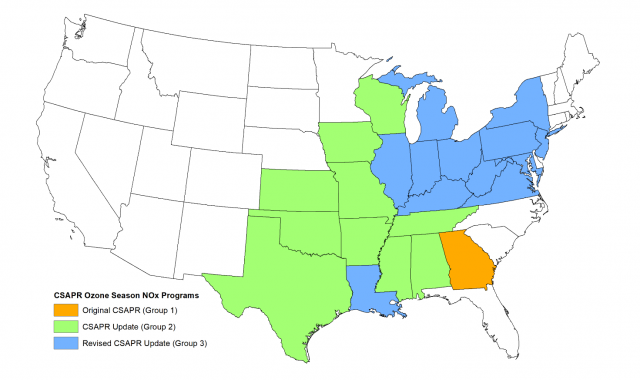 The EPA finalized the initial version of CSAPR in 2011 to reduce the pollution that blows across state lines and prevents downwind states from meeting the “good neighbor” provision of the Clean Air Act. CSAPR does this by setting a total pollution budget for all regulated states, then allocating a portion of the budget to each state. States can then buy and sell portions with other states in their region, letting market forces decide which plants reduce emissions first. This cap-and-trade strategy gives power plant operators flexibility to adapt over time while ensuring that the total amount of pollution falls.

Since then, CSAPR has been updated several times to increase its stringency. EPA’s first update in 2016 was challenged judicially and ultimately remanded in 2019 by the D.C. Circuit Court of Appeals. At the time, the court determined that the updated rule unlawfully allowed upwind states to continue contributing to downwind air quality problems beyond the date at which downwind states were required to comply with the 2008 ozone National Ambient Air Quality Standards (NAAQS). In effect, the court determined that the updated rule wasn’t stringent enough and demanded an enhanced update.

On April 20, 2021, EPA finalized a second update to CSAPR to resolve this issue. As a result, power plants in 12 upwind states were required to install additional NOx emissions controls, addressing their outstanding “good neighbor” obligations and clearing the air for millions of Americans. The finalized rule also established a new, more stringent pool of emissions trading. The EPA estimated then that the updated rule would cut summertime NOx emissions from the 12 linked states by 17,000 tons compared to projections without the rule, which would prevent 290,000 asthma events, 560 hospital and emergency room visits, 110,000 days of missed work and school, and up to 230 premature deaths in 2025.

The most recent update, proposed in February 2022, is designed to ensure that states meet the more recent 2015 ozone NAAQs. If adopted, it would impose a new, strengthened emissions trading program in 2023 and set the overall emissions budget for 2026 at a level that would require plant owners to install modern pollution controls. This will guarantee that the one-third of large coal-fired power plants in covered states that haven’t yet installed controls will either do so or retire. In 2026, the EPA expects the program to reduce summer NOx emissions in the power sector by 29 percent—47,000 tons—in the 25 covered states, preventing an estimated 1,000 premature deaths, 2,400 hospital and emergency room visits, 1.3 million cases of asthma, and 470,000 school absence days. As co-benefits, in 2026 alone, the EPA estimates that the new rule will also cut sulfur dioxide emissions by 106,000 tons, particulate emissions by 9,000 tons, and CO2 emissions by 40 million metric tons. EPA estimates that benefits in 2026 would be at least $9.3 billion and could be as high as $18 billion.

The proposed rule was submitted to the Federal Register on February 28, 2022 and is now awaiting publication. Once it is published, the EPA will schedule a virtual public hearing and the public will have 60 days to submit comments.