Last month, the Orlando Utilities Commission (OUC) announced a plan to stop burning coal by 2027 at the Stanton Energy Center. This plan is a pivotal first step to Orlando meeting its 2050 commitment to 100% renewable energy. The leadership of Orlando Mayor Buddy Dyer and on-the-ground advocacy efforts by the First 50 Coalition (armed with expert analysis performed by Synapse Energy Economics) were critical in catalyzing this announcement and commitment by the OUC.

Leadership of this type is particularly important and meaningful in Florida. The state is uniquely vulnerable to the impacts of climate change, but it also uniquely blessed with enormous solar potential and considerable unrealized energy efficiency potential. Given the state’s environmental vulnerability and the abundance of untapped and cost-effective clean and renewable alternatives, actions such as these are needed to address the City’s contribution to climate change. Such actions also make good economic sense for ratepayers.

This announcement to phase out coal was received with cheers for OUC, but the sobering reality is that OUC does not intend to retire the 613 megawatts of fossil fuel capacity at Stanton units 1 and 2 by 2027. Instead, OUC plans to invest millions to transition the units to operate on gas. With this announcement, OUC is signaling its intention to continue its reliance on fossil resources for the foreseeable future. It will remain with coal through 2027 and then transition to gas, which it would use beyond 2030.

OUC currently relies on coal- and gas-fired resources for around 90 percent of its generation. The Company has no installed wind or battery storage, and no plans to install either (as of its last 10-Year Site Plan). Further, OUC ranks among the worst in the nation for energy efficiency investment, reporting savings of only 0.2 percent of retail sales in 2019. The national average is 1.03 percent.

Transitioning to renewables will save ratepayers money

We found that transitioning to renewables will likely cost the least while converting Stanton to gas will likely cost the most. Specifically, transitioning to renewables will save ratepayers $176 million over the next two decades relative to continuing to rely on coal and $543 million relative to converting Stanton to gas.

Note: Negative value = savings. Discount rate = OUC WACC of 6.3 percent. NPVRR does not include landfill gas costs, which were not available and do not differ across scenarios. 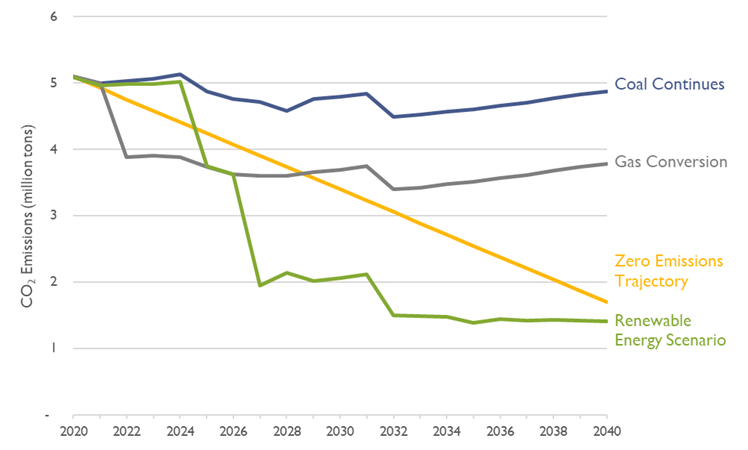 We evaluated the risks that continued reliance on fossil fuels pose to ratepayers. We found that reliance on fossil resources subjects ratepayers to risks from regulatory uncertainty, stranded asset potential, and fuel price volatility, as well as health risks from air pollution (which exacerbates lung and heart conditions and increases vulnerability to certain diseases, including COVID-19). These risks are significantly minimized, if not completely eliminated, with a transition away from fossil resources.

Finally, we found that replacing Stanton Units 1 and 2 with renewables, battery storage, and demand-side management solutions increases local, high-quality jobs in the region. Investment in renewables and energy efficiency results in two to three times more jobs for the state than the same level of investment in fossil resources (as there are relatively few in-state coal and gas jobs). Specifically, we found that a Coal to Gas Conversion scenario is expected to lose just over 2,000 net job-years (total years of full-time employment) while the Renewable Energy scenario is expected to create over 11,000 net job-years over the period 2020–2040 relative to the Coal Continues scenario. Further, the jobs created are higher quality; the weighted average income for the created jobs across all resources and all sectors is estimated to be $72,976 as compared to an economy-wide average of $62,977. 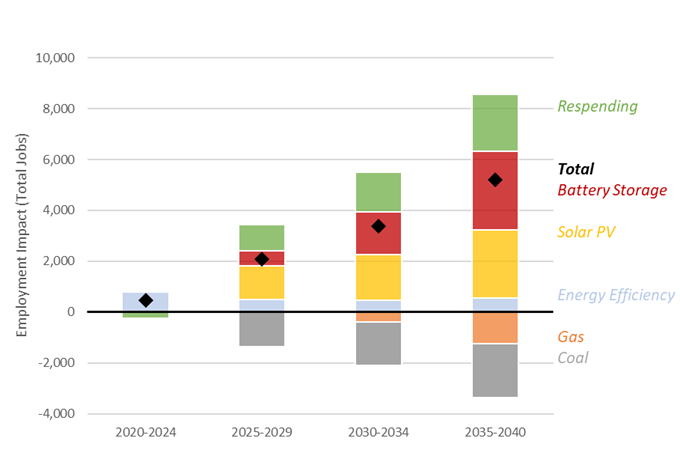 OUC’s announcement to phase out coal is a positive and good first step. But OUC has still not provided the City with a clear plan on how it will transition from its current reliance on fossil fuels to a clean system that relies on solar PV, battery storage, and energy efficiency. OUC also has not robustly evaluated the cost of an alternative resource portfolio that phases out its reliance on fossil resources. A renewable portfolio will not only provide environmental benefits, but as we showed in our report, will directly save the citizens of Orlando hundreds of millions of dollars, in addition to providing significant local jobs and economic stimulus and protecting public health.

To learn more about how Orlando can power itself with 100% renewable generation by 2050, read the full Synapse report here.