ACE: What's in the cards for emissions reductions

The new proposal lays out a starkly different view of the role of the U.S. Environmental Protection Agency (EPA) in regulating coal and, if implemented, would remove several federal barriers to increasing coal-powered generation from existing plants in the forthcoming decades. At the heart of ACE is a change in how EPA defines the “best system of emission reduction” (BSER) for coal. The Clean Air Act gives EPA responsibility for determining this definition, with the effect of setting the regulatory course. ACE features two main changes to clean air regulations: (1) a new definition of BSER for achieving greenhouse gas reductions and (2) a revision of New Source Review (NSR).

First, while the Clean Power Plan specified a BSER that involved systemwide reductions in emissions from sources that could include renewables, energy efficiency, increased utilization of gas plants, and heat rate improvement (HRI) at coal plants, ACE limits its BSER to HRI only. Heat rate is a measure of generation efficiency that indicates the fossil fuel energy input consumed per unit of useful energy output. It is a plant-specific (“inside-the-fenceline”) indicator that is designed to narrow the scope for EPA coal regulation. Since the new measure only addresses the per-unit resource intensity of coal power production, it opens the door to an increased level of coal generation in the nation’s generation portfolio.

Under ACE, EPA takes an advisory position, rather than outlining specific HRI goals, emission rate ceilings, or mass-based caps. EPA has published a list of “candidate technologies” that can be applied at individual plants, including Boiler Feed Pumps, Air Heater and Duct Leakage Control, Variable Frequency Drives, along with several others. Using this list, EPA directs individual states to set “standards of performance” – taking stock of local factors and priorities and considering an individual plant’s remaining useful life. While states will be obligated to submit “standards of performance” to EPA, ACE does not explicitly address how these standards will be evaluated.

ACE further eases the regulatory requirements by extending the implementation timetable. Under ACE, states are directed to submit standards within three years. EPA then has one year to evaluate the plan—and then an additional two years to formulate one for the state should the state fail to submit a plan or provide one that is substandard. By comparison, the Clean Power Plan prescribed nineteen months for implementation.

Second, EPA has proposed to relax the current NSR policy under ACE. The existing NSR provision requires plant owners to submit to a review to secure a permit for any change that will significantly increase total emissions over the course of a year. This review may be conducted by either EPA or state authorities depending on the class of impact, though EPA always sets the baseline standards that determine whether changes will be allowed (state standards may be even more stringent). Under ACE, NSR will be triggered only if a change will increase maximum per-hour emissions. The obvious consequence is that a coal plant might adopt one or more candidate technologies and improve its efficiency, leading to greater utilization and increased aggregate emissions, all without triggering any review.

To model the impacts of ACE, EPA developed three scenarios with the rule in place and two baseline scenarios without it. The two baseline scenarios EPA uses represent the power sector either (a) with the Clean Power Plan in effect or (b) with no EPA rule regulating CO2 emissions from power plants. EPA compares these with three scenarios that make projections under the new ACE rule. The first ACE scenario assumes NSR regulations are left as they were before ACE, and consequently models a small heat rate improvement at a modest cost. EPA argues that if NSR regulations were left unchanged, some efficiency measures would trigger the expensive permitting process. The added costs would reduce the total amount of efficiency improvements considered likely.

The other two “with ACE” scenarios assume NSR regulations have changed so that efficiency improvements do not trigger new permitting requirements. These scenarios model larger heat rate improvements at two different cost levels. While EPA does not stipulate what level of HRI should be implemented at particular plants or in different states, EPA models varying levels of HRI based on assessed values from the literature.

The results of EPA’s modeling suggest that ACE will only slightly reduce greenhouse gas emissions. In all three ACE scenarios, ACE is projected to reduce power sector CO2 emissions in 2030 by only 1 percent relative to the no-CPP baseline (see Figure 1). Relative to the Clean Power Plan, emissions are projected to be 3 percent higher in 2030 in all ACE scenarios. ACE is more restrictive in its determination of what constitutes BSER, so fewer reductions are achieved than would be under CPP. Emissions of other pollutants are also projected to be higher than they would have been under the Clean Power Plan—emissions of sulfur dioxide and nitrogen oxides increase under every scenario modeled.

Figure 1. CO2 emissions under ACE and CPP, as modeled by EPA 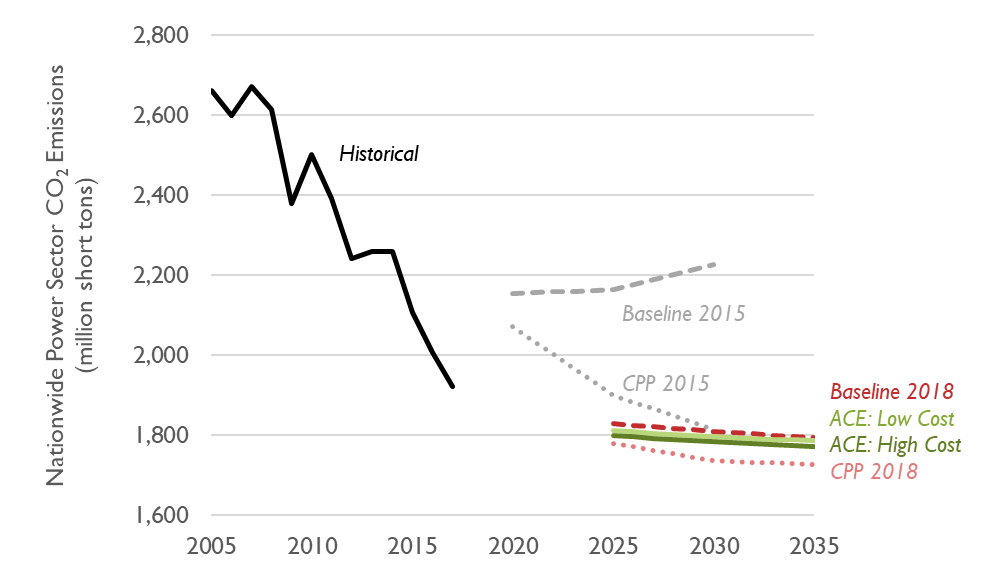 Notes: A third ACE scenario (featuring no change to NSR) is not shown in this figure; according to EPA’s modeling, it has virtually identical emissions to the “ACE: Low Cost” scenario. Some assumptions made in EPA’s 2015 and 2018 modeling may differ.

EPA also models the costs and benefits of the ACE. Depending on the cost assumed for ACE, the rule ranges from costing $3 billion more than the Clean Power Plan to $6.4 billion less than the Clean Power Plan (over a 15-year period). Notably, EPA finds that the cost of complying with the Clean Power Plan has decreased from $5.5 billion in 2030 alone to just $0.7 billion. Meanwhile, EPA’s calculation of benefits is primarily driven by climate change benefits and direct health benefits due to reductions in non-CO2 pollutants. In every scenario modeled, EPA finds that ACE is between $13 and $72 billion more expensive than the Clean Power Plan on a net benefit basis (benefits minus cost). This wide range accounts for uncertainty in discount rate, HRI costs, and the extent of the direct health benefits achieved by reducing non-CO2 emissions. Note that in the latest analysis, EPA only accounts for the climate impacts of avoiding CO2 on the lower 48 states, rather than the impacts on the entire globe, and ignores the increased risks of reaching different climate tipping points that could result in much higher costs. These omissions were not made when EPA analyzed the Clean Power Plan in 2015.