On January 24, 2019, the U.S. Energy Information Administration (EIA) released the 2019 Annual Energy Outlook (AEO). AEO 2019 contains projections of energy use from the electric power, residential, commercial, industrial, and transportation sectors through 2050. As in prior years, EIA has released a Reference case alongside many other cases exploring futures with various levels of economic growth and oil and gas availability. AEO 2019’s Reference case does not represent a forecast; instead, it’s a projection based on estimates of fuel availability, changes in technology costs, and current legislation.

Electric-sector CO2 emissions are projected to decrease, relative to AEO 2018

Compared to last year’s AEO projection, electric sector carbon dioxide (CO2) emissions are 6 percent lower in AEO 2019, when looking at the entirety of CO2 emitted between 2019 and 2030 (Figure 1). Interestingly, this means that cumulative emissions over this time period (as modeled in AEO 2019) are 1 percent lower than the last AEO scenario modeling the now-repealed Clean Power Plan.

Figure 1. Comparison of electric-sector CO2 emission projections in the AEO 2019 and 2018 Reference case 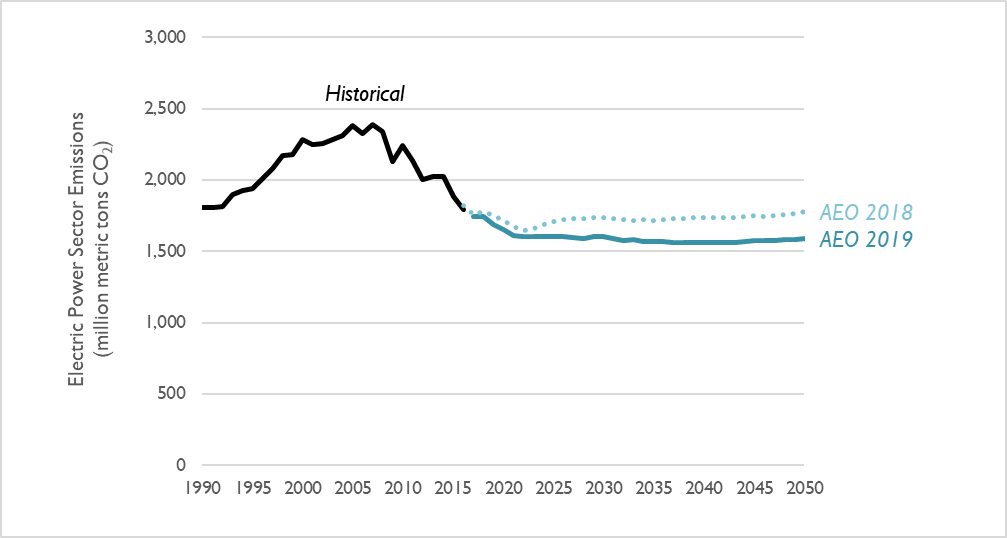 Figure 2. Comparison of electricity generation from coal, natural gas, and renewables in the AEO 2019 and 2018 Reference cases (series from AEO 2018 are shown as dotted lines) 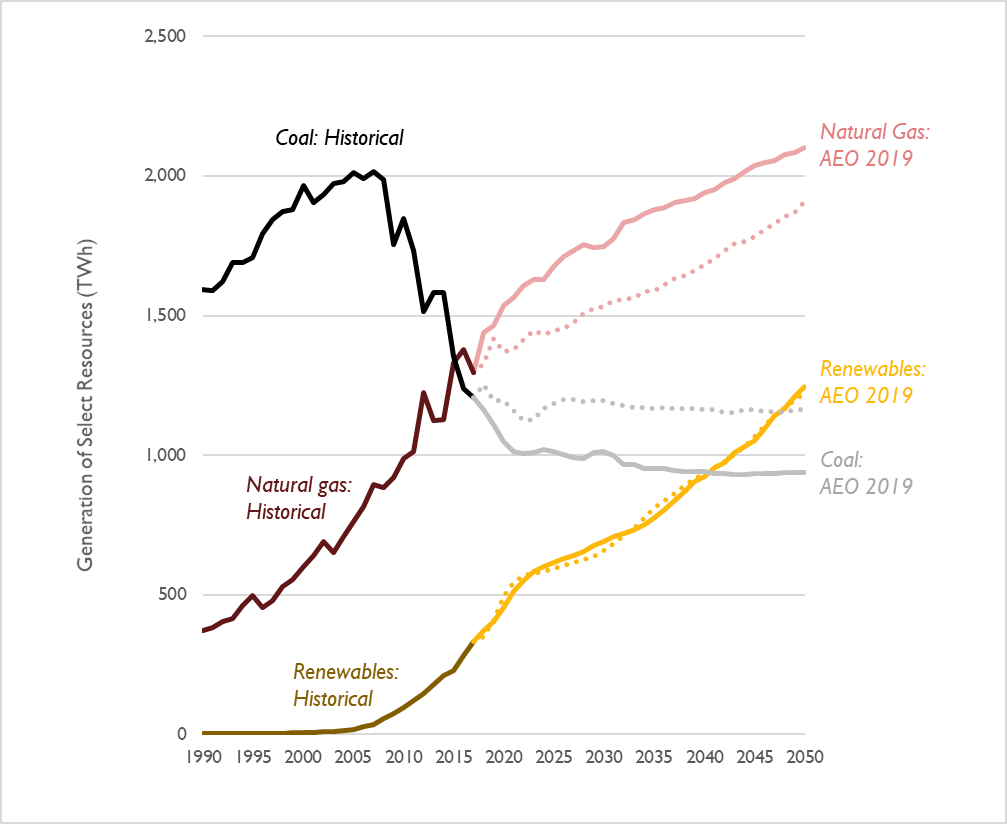 The shifts in natural gas and coal generation are due in part to lower projections of natural gas prices in the latest AEO (see Figure 3). Between 2019 and 2030, natural gas prices are projected to be 16 percent lower than in last year’s AEO projection, with particularly low prices in near-term. These low gas prices help drive 75 GW of coal retirements by 2030 (equivalent to about 30 percent of present-day coal capacity). 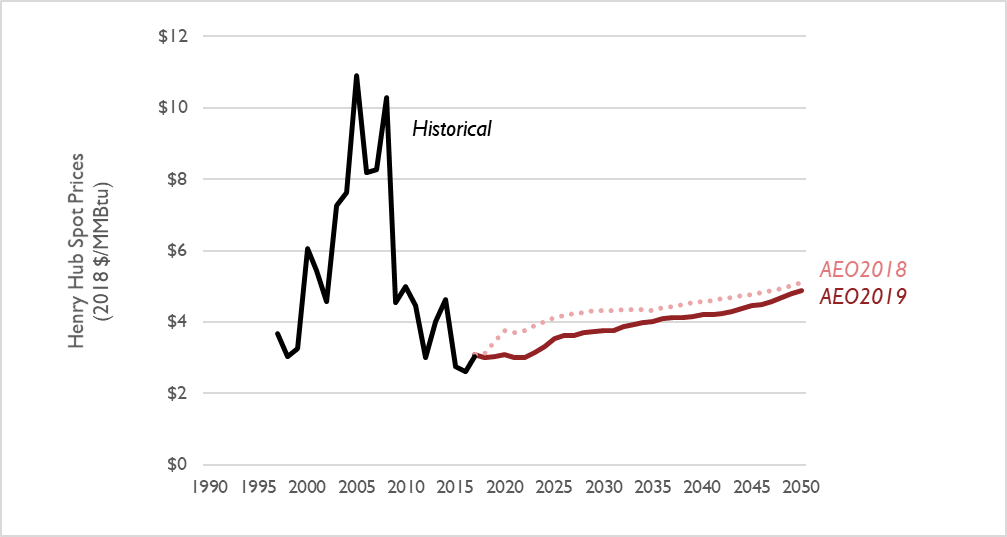 Aggregated electricity generation from coal, natural gas, renewables, and other resources in AEO 2018 are virtually unchanged compared to last year’s projection. This is because EIA has not significantly revised its projection for electricity sales (see Figure 4). Between 2019 and 2030, projected electricity sales are, on average, 0.7 percent higher per year relative to AEO 2018. By 2030, this represents a 10 percent increase in sales relative to today’s levels.

Figure 4. Comparison of electricity sales projections in the AEO 2019 and AEO 2018 Reference cases 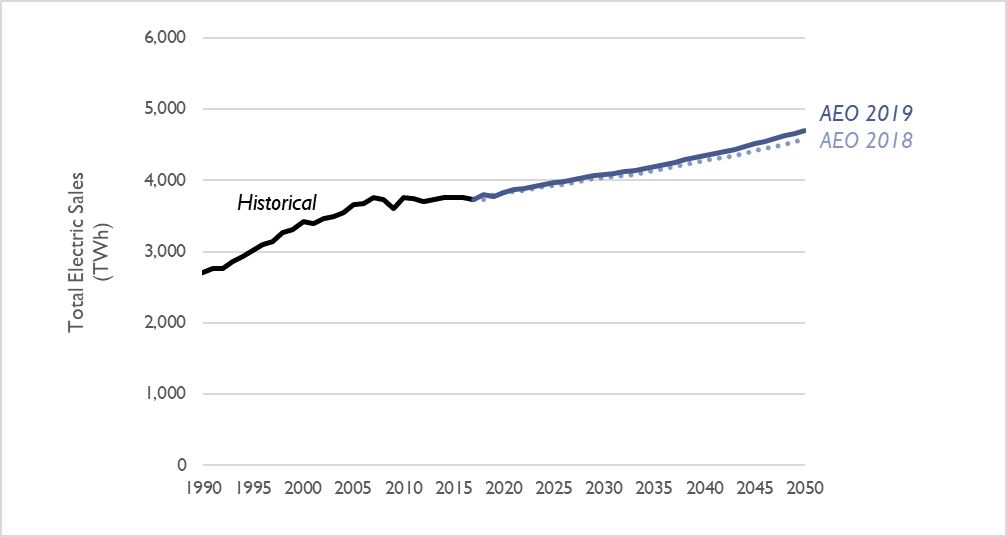 Through 2030, EIA projects more cars on the road but higher amounts of electric vehicles

EIA has revised its methodology behind its projection of light duty vehicle (LDV) stock (i.e., cars, SUVs, and small trucks) through its study period. This revision results in a total increase in LDVs of 5 percent by 2030. In AEO 2019, the number of cars expected to be powered by electricity has increased; in 2030, plug-in hybrid and fully battery-powered EVs are expected to together constitute 5 percent of LDV stock, up from 4 percent in AEO 2018. 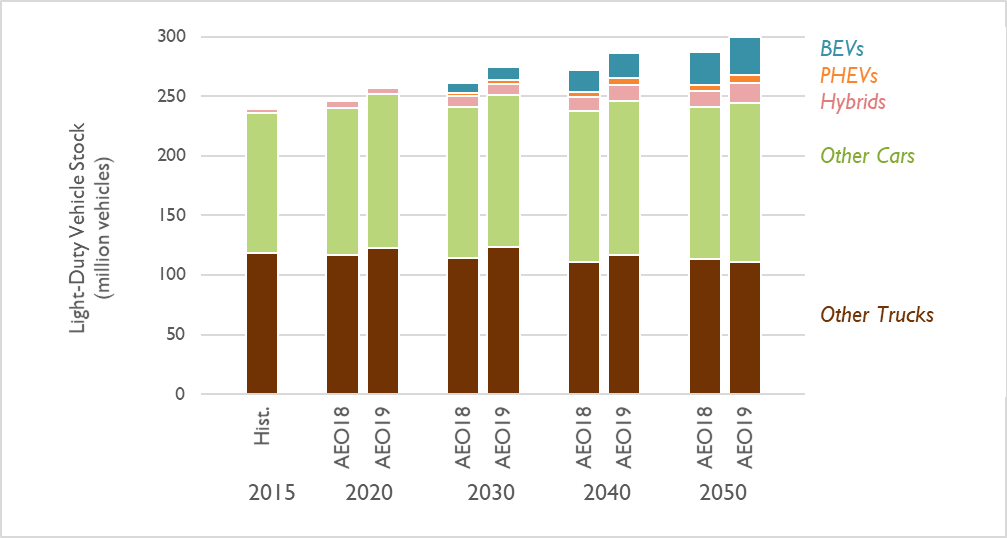 According to the 2015 U.S. Report to the United Nations Framework Convention on Climate Change, national CO2 emissions need to reduce by 25 percent by the year 2025 and 80 percent by 2050 to avert catastrophic climate change. The AEO 2019 Reference case features marginally lower emissions than AEO 2018 (a cumulative decrease between 2019 and 2050 of 3 percent). In 2050, AEO 2019 projects emissions will be 4.2 times higher than what is recommended by climate scientists (see Figure 6).

Synapse recommends that future editions of the AEO model cases with policies that achieve these long-term emission reduction targets.

Figure 6. Comparison of all-sector CO2 emission projections in the AEO 2019 and 2018 Reference cases relative to the level needed to avert catastrophic climate change (shown on this chart as a dashed line) 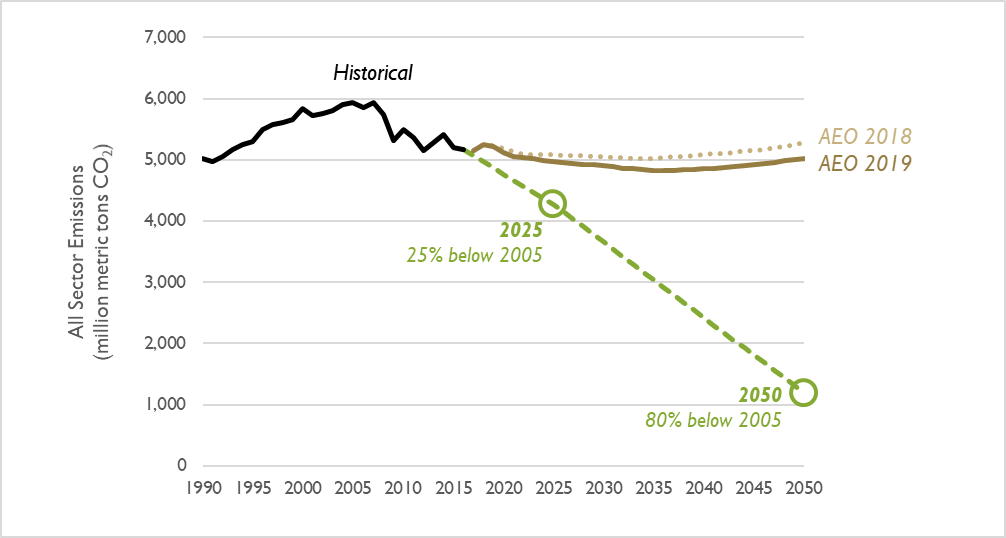