An Awkward Fit for Jobs Impacts in Benefit-Cost Analysis

Synapse recently tackled an interesting challenge while analyzing a community solar program and its alternatives on behalf of the Rhode Island Division of Public Utilities and Carriers: Where do jobs and other macroeconomic impacts fit into a good benefit-cost analysis (BCA)?

Rhode Island’s Public Utilities Commission (PUC) requires that utility spending proposals be supported by a BCA, and these BCAs in turn must be based upon the Rhode Island benefit-cost test (RI Test). In practice, this means that potential investments are judged by their impacts both within the utility system and beyond. The RI Test accounts for various non-utility impacts, including impacts on the environment and economy.

The emphasis on BCA and the wide perspective of the RI Test makes good economic sense but implementing these requirements can be nuanced. On the surface, the PUC’s prior guidance to decision-makers about macroeconomic impacts and BCAs seems clear enough: when comparing two alternative utility investment plans, all else equal, the one with superior macroeconomic impacts should be chosen. In practice, this issue is often more complicated.

While we relied on existing precedent for guidance in accounting for environmental and public health impacts, we still needed to determine how to account for macroeconomic impacts in our analysis.

Should macroeconomic impacts be added to other costs and benefits in the BCA?

BCAs often consider a wide array of different impacts. Those impacts that can be expressed in monetary terms (monetized) are usually added up to produce one or more top-line results—in particular, the project’s net benefits and its benefit-cost ratio (BCR).

On the other hand, impacts that cannot be monetized must by necessity be reported separately. Since macroeconomic effects can be monetized—in terms of changes in GDP, income, or other impacts—it’s easy to assume that they should be added into the net benefits or BCR. The Synapse team, however, concluded that this assumption would likely result in inaccurate total impacts.

After considerable internal debate and consulting with leading practitioners in the field,  we concluded that adding monetized macroeconomic impacts into BCA results could result in double-counting of costs and/or benefits that might contribute to a distorted view of overall project impacts.

The core concern is that nearly identical values enter into both the BCA and the economic impact analysis. In the context of a renewable energy program, examples of these repeated values are: 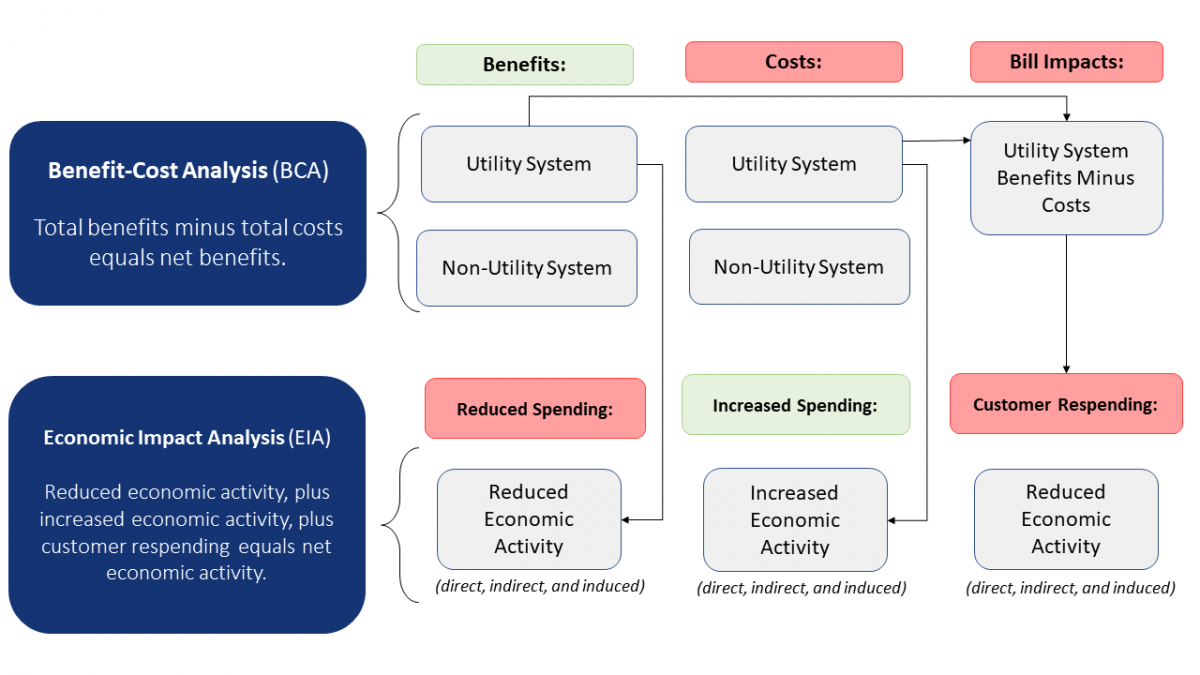 GDP can be blunt or misleading. Jobs and income impacts are more tangible. But jobs cannot be monetized (and so cannot be added directly to monetized benefits and costs) and income in isolation provides too limited a view.

While the PUC has not provided explicit direction on which macroeconomic measures should be reported in conjunction with a BCA, the Synapse team reached a simple conclusion:

BCAs under the RI Test should report all of the economic impact analysis indicators, including GDP, income, and jobs impacts—and none of these indicators should be added to the monetary results of the BCA.