Clearing Up the Confusion on Pipeline Studies

New England’s growing dependence on natural gas has had some in the region worrying about supply constraints. In fact, concerns about natural gas supply and the impacts of proposed new pipelines prompted no fewer than three separate studies on the issue last year. In 2015, three consulting firms released separate reports for different clients analyzing the need for incremental natural gas pipeline in New England through 2030. The three distinctly different approaches to the studies have the potential to create uncertainty for those trying to compare the results. To address this confusion, Synapse produced a white paper which reviews the main differences in the methods and inputs for each of the three studies, along with their results and key findings.

Overall, we find the key takeaways from the Synapse study performed on behalf of MassDOER to be consistent with the most recent of these studies, released by the Analysis Group on behalf of MassAG. We also find that several issues of critical importance to an assessment of pipeline need are largely ignored in ICF’s study on behalf of Kinder Morgan: 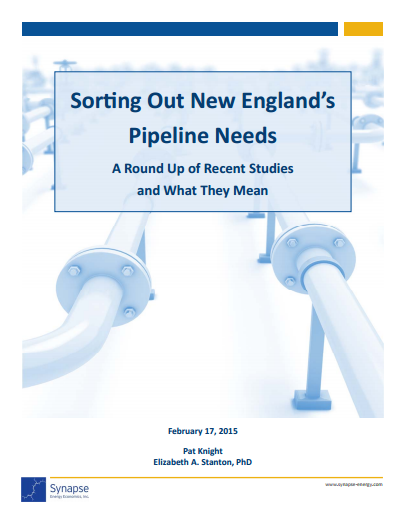