The Massachusetts Supreme Judicial Court’s recent Kain decision placed the Baker Administration on notice: The Commonwealth must establish regulations that will ensure the annual emission reductions needed to keep its 2020 greenhouse gas emissions below 70.8 million metric tons of CO2-equivalent. With only 52 months left to achieve this Global Warming Solutions Act target, Massachusetts will need quick action from its Office of Energy and Environmental Affairs, along with strong collaboration from legislators, environmental advocates, utilities, and local governments. With the House and Senate having now resolved their differences on the 2016 energy bill, what are Massachusetts’ prospects for complying with its climate law?

Here are the numbers: 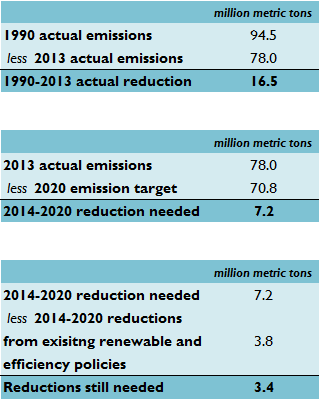 And, so far, so good! In 2013 (the last year for which Massachusetts emissions inventory data are available), state-wide emissions clocked in at 78.0 million metric tons—with most of this reduction having come from the electric sector.

That leaves an additional 7.2 million metric tons of annual emission reductions needed by 2020.

But where will the other 3.4 million metric tons of reductions come from? 52 months. Tick tock.

But even if Massachusetts got even more out of its existing electric sector emission reduction programs by following these examples, that still leaves a 1.9 million metric ton gap to compliance with the Global Warming Solutions Act in 2020.

What additional measures could be put in place quickly to close the gap in emission reductions within the next 52 months?

New transmission lines from Canada? Getting a new line financed, permitted, constructed, and online to bring Canadian hydro-electric generation to New England by 2020 will be quite a challenge. Several proposed transmission projects have already made some progress on these hurdles, but at this point no line can guarantee transmission in 2020. Each new 1 gigawatt line (operating for about as much of the year as existing lines) could bring 1.5 million metric tons of reductions. (Massachusetts’ 2016 compromise energy bill calls for an approximately 1.4 gigawatt line—taking existing lines’ operation levels into account—by December 31, 2022.)

Repairing gas leaks? While critical for avoiding dangerous climate change, because of the way that gas leaks are currently under-accounted for in the Commonwealth’s emissions inventory, fixing them does little to address Global Warming Solutions Act compliance. (The House and Senate compromise bill includes provisions to repair major gas leaks but does not specify a deadline.)

Federal efficiency and vehicle standards? These have the potential to deliver additional emission reductions by 2020, but it’s difficult to estimate just how much they would impact Massachusetts incremental to state programs. There may also be some special challenges for state agencies to demonstrate that these measures meet the very specific requirements of the Kain decision.

The Northeast Regional Greenhouse Gas Initiative? RGGI will bring more emission reductions to the region before 2020, but these reductions are already baked into the numbers presented above. The current RGGI review process may result in lower emissions caps, but these changes are unlikely to take effect by 2020 and don’t meet the Kain standard for emission reduction regulations.

Building a new natural gas pipeline in Massachusetts? Burning more natural gas leads to higher, not lower, emissions. In New England’s electric sector, increased natural gas generation capacity largely displaces future renewable additions or Canadian hydro transmissions. In heating, natural gas boilers can have positive short-term effects by substituting for burning oil, but these investments are meant to last for 30 or more years. There’s no room for the Commonwealth to lock in to burning natural gas for heat when the Global Warming Solutions Act calls for an 80 percent reduction of greenhouse gas emissions by 2050. (The Senate’s language banning utilities from investing in new pipelines and then charging electric customers for these investments did not make it into the compromise energy bill.)

Massachusetts needs an extra 3.4 million metric tons of greenhouse gas emission reductions by 2020 that cannot and will not come from electric sector renewable and efficiency programs as they are currently written. Fast, significant emission reductions are needed from some combination of:

(2)    New Canadian hydro transmission lines with appropriate consideration of their likelihood to be in operation by 2020; and

(3)    Other quick turnaround measures from outside of the electric sector.

Fifty-two months isn’t a lot of time, and the House and Senate compromise energy bill offers little in the way of concrete measures that will reduce greenhouse gas emissions by the 2020 deadline. Nonetheless, the emission reductions achieved by Massachusetts since the Global Warming Solution Act was enacted in 2008 demonstrate the Commonwealth’s collective ability to roll up its sleeves and get the job done. The Legislature has lost its chance to help bring Massachusetts into compliance with its climate law until 2017, but the Office of Energy and Environmental Affairs’ mandate is clear and there’s no time like the present.