Synapse forecasts Low, Mid, and High CO2 price trajectories annually for planning purposes, to provide electric utilities and other stakeholders with a reasonable range of emissions costs that can be used to evaluate long-term resource investment decisions.

Developments from the past 12 months that factored into the 2015 update include the expected cost of compliance with EPA’s Clean Power Plan (including a new Synapse analysis using the ReEDS model), a growing number of electric utilities that include projections of the expected costs associated with greenhouse gas emissions in their resource planning, and progress with existing state and regional cap-and-trade policies. 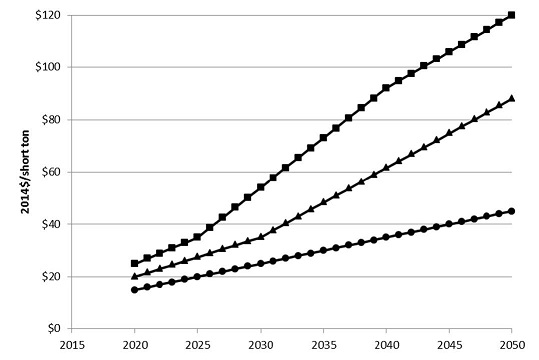 Note: All costs are reported in 2014 dollars.

To summarize the range of expected costs of compliance with the Clean Power Plan, Synapse reviewed costs as modeled by EPA, Synapse, and third‐party analysts. While costs vary depending on the assumptions used by the modeling teams, 2030 compliances costs tend to hover around $30 per short ton. Synapse’s own analysis was conducted with the National Renewable Energy Lab’s ReEDS (Regional Energy Development System) model and looked at two potential compliance trajectories, assuming national cooperation (Synapse found that allowance prices would range from $16-$25 throughout the 2020-2030 timeframe, though less cooperation between states would result in higher costs).

Utilities are increasingly accounting for these costs and for other existing or expected future regulations that will result in higher costs to generating resources that emit CO2, Synapse’s review of utility IRPs reveals. Synapse has conducted an extensive study of resource plans dating back to 2003, including 115 IRPs released between 2012 and 2015. Of those 115 IRPs, over half (61) include a CO2 price in the reference case scenario. As a point of comparison, none of the 15 IRPs published between 2003 and 2007 that Synapse reviewed included a CO2 price forecast in any scenario.