Tricks of the Trade: Who Can Sell Emissions Credits to Whom in the Clean Power Plan (Part 1 of 2)

In this series of posts, we explore how EPA has designed the Clean Power Plan to facilitate the buying and selling of credits representing emissions reductions at fossil-fuel fired power plants. Part 1 focuses on rate-based trading. Part 2 will explore how states can trade allowances representing tons of CO2 emissions.

Under rate-based compliance, fossil-fired resources would buy Emission Rate Credits, or “ERCs.” With certain exceptions, one ERC represents one megawatt-hour (MWh) of emissions-free generation. Resources purchase ERCs and add them to the denominator of their emission rate equation to determine their emission performance rate:

EPA’s subcategorized emission performance rates are the foundation upon which each of the above options is built and were determined by EPA to represent the improvement possible using the best system of emission reductions (BSER). However, because the BSER reflects impacts from shifting generation to zero- and lower-emitting resources, most existing units cannot meet these performance rates through operational changes alone. That is why EPA has designed each of the rate-based approaches to allow for emissions trading.

How ERCs Are Produced

ERCs can be used by a fossil fuel-fired generator to demonstrate compliance with its assigned performance rate. ERCs are produced in three distinct ways

These are what we are calling “standard ERCs.” Standard ERCs are produced by new renewable, nuclear, energy efficiency, and biomass resources and certain other measures that can be shown to reduce electric-sector CO2 emissions (such as transmission and distribution measures that reduce line losses, upratings at existing nuclear or hydro plants, or demand response measures).

Generators or savings measures that were built or installed on or after January 1, 2013 can begin producing one ERC for every one MWh of energy generated or saved starting on January 1, 2022. There are, of course, a few exceptions to this rule.

Standard ERCs (including CEIP ERCs) can be used at both combustion turbine (NGCC) units and fossil steam (coal) units to reduce their overall emission performance rate.

Gas-shift ERCs are produced by existing NGCC units that increase their output and displace coal. These ERCs are meant to incentivize the shift from coal to NGCC generation that is reflected in Building Block 2 of the BSER. Gas-shift ERCs represent a credit, on a pro-rata basis, to all NGCCs for the incremental generation needed to get all units generating to a 75 percent capacity factor, versus the 2012 baseline. The number of ERCs each NGCC can produce is based on a complex combination of factors, including how much better the NGCC unit’s emission rate is compared to the national fossil steam emission performance rate, the distribution of the total possible incremental generation across all NGCC units, and the total net energy output from the NGCC unit in the year for which ERCs are being calculated. Here’s the equation:

Essentially, EPA wants to give credit to existing NGCCs for upping their capacity factors since that helps to displace higher-emitting fossil generators, thereby reducing total emissions from the electric sector. As one way of trying to ensure that this shift actually happens, EPA requires that gas-shift ERCs may only be used for compliance by fossil steam units.

The last type of ERC is produced by existing fossil steam and NGCC units that perform better than their assigned rate. The number of ERCs this type of unit can produce is determined by the total output from the unit in a given year multiplied by a factor representing how much better the unit performs compared to its assigned rate (i.e., the difference between the unit’s assigned rate and its actual rate, divided by the assigned rate). Here’s another equation:

The table below summarizes some of the important features of each ERC type.

How ERCs Are Traded

On the other hand, if two states each choose the R2 compliance approach, they may only trade ERCs if they first coordinate with each other to establish a common state-average emission performance rate that represents the weighted average of both states’ fossil steam and combustion turbine generation and submit a joint compliance plan.

The figure below illustrates the potential trading interactions across states and compliance pathways. In this diagram, units in each single state (represented by “AA”, “BB”, etc.) may trade ERCs within each solid circle, representing trading between units in the same state. Beyond that, units can only trade with units in other states that are taking the same approach, or are working together to meet an agreed-upon approach, represented in this diagram by the dotted circles. 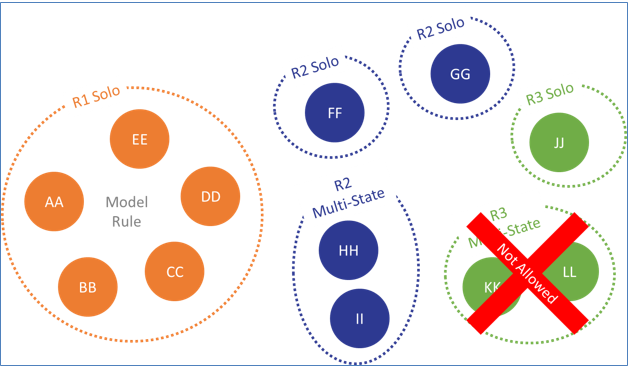 With one limited exception, ERCs can never be produced by resources or measures in a state that has opted for a mass-based compliance approach. The exception involves renewable energy resources that are physically located in a mass-based state but are electrically connected to a rate-based state. These resources must have a contract (such as a power purchase agreement) showing that the power from the renewable energy resource will serve customers in the rate-based state, thereby displacing generation in that state.

One more interesting tidbit on ERCs is that they can be produced by resources located in areas that are not covered by the Clean Power Plan, such as Vermont, Washington D.C., certain Tribal lands, and even Canada or Mexico. Qualifying resources in these regions can produce ERCs as long as they are electrically connected to a rate-based state.

One final note on trading under a rate-based compliance approach: ERCs can come from any eligible generator or measure as long as they are electrically connected to the contiguous U.S. bulk power grid. That means an ERC produced by a wind turbine in northern Maine could be sold to a coal unit in Wyoming to reduce its emission performance rate. The fact that the resource being displaced by the MWh of wind in Maine might be gas, while the resource that would have been displaced by the same MWh of wind in Wyoming is more likely coal, is not accounted for in EPA’s ERC trading options. (See our blog post When is a MWh Not a MWH? Emissions Displacement and the Clean Power Plan for more information on emissions displacement.)