Tricks of the Trade: Who Can Sell Emissions Credits to Whom in the Clean Power Plan (Part 2 of 2)

In this series of posts, we explore how EPA has designed the Clean Power Plan to facilitate the buying and selling of credits representing emissions reductions at fossil-fuel fired power plants. Part 1 focuses on rate-based trading. Part 2 explores how states can trade allowances representing tons of CO2 emissions.

Note: This post represents Synapse’s current interpretation of the Clean Power Plan, which is subject to change based on clarifications or new documents released by EPA.

Under EPA’s proposed model rule, states that choose to comply with the Clean Power Plan on a mass (tons of CO2) basis will be able to trade allowances, which represent one short ton of CO2 reduction. The number of allowances made available each year under a mass-based trading program must equal the state’s aggregate emission limit, which is set by EPA, and every generator subject to the Clean Power Plan must surrender allowances equal to the quantity of CO2 it emits during the compliance period.

One key advantage to mass-based trading is that, unlike in rate-based approaches, all units in all mass-based states are able to trade allowances with one another as long as they prove to EPA they are effectively compatible. The figure below illustrates the potential trading interactions across states and compliance pathways. In this diagram, units in each single state (represented by “AA,” “BB,” etc.) may trade ERCs or allowances within each solid circle, representing trading between units in the same state. In the rate-based universe (shown on the left), units can only trade with units in other states that are taking the same approach, or are working together to meet an agreed-upon approach, represented in this diagram by the dotted circles. 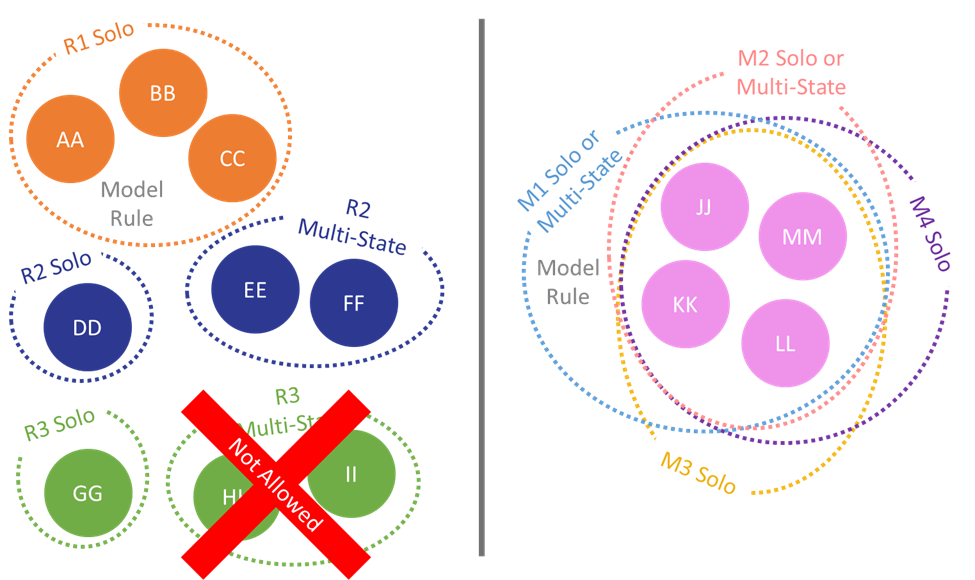 Allowances can be distributed through free allocation, by auction, or by some combination of the two. Free allocation of allowances can help compensate newly regulated sources for the cost of complying with the new regulations and may help reduce the risk for generators. EPA has designed its model mass-based trading program to use a free-allocation method of distributing allowances. (EPA has stated that it prefers not to conduct auctions, as federal law would require the proceeds to be deposited in the U.S. treasury. EPA is seeking comment on whether the model rule and proposed federal plan should include auctioning of some or all allowances, rather than free allocation, despite these requirements.)

Many existing mass-based trading programs, including the Regional Greenhouse Gas Initiative in the Northeast, use an auction process to distribute allowances. Auctions have many potential benefits, including incentivizing early action, avoiding indirect subsidies for operation of uneconomic resources, and decreasing policy costs through revenue recycling.

Under the proposed model rule and federal plan, EPA proposes to freely allocate allowances to existing sources based on historical generation minus certain set-asides (explained below), which the agency believes will help mitigate emissions leakage to new sources. The total number of allowances that are distributed—the emission budget—would be equal to a state’s mass-based goal.

EPA established the Clean Energy Incentive Program to encourage and reward early development and installation of renewable energy and low-income demand-side energy efficiency. EPA proposes to set aside from the emission budget for the first compliance period up to 300 million CO2 allowances for use as matching early action allowances under the CEIP. A portion of these set-asides would be reserved for wind and solar projects and a portion for low-income energy efficiency.

Any CEIP allowances that are not awarded will be redistributed to the participating states either on the same pro-rata basis described above, or they will be deposited into a federal pool where they will be available to qualified projects on a first-come, first-served basis.

Any CEIP allowances that have not been awarded by the end of 2022 will be retired. Early action allowances can be banked for future use and traded freely among states with compatible trading programs.

EPA proposes to set aside a limited portion of allowances to existing NGCC units based on their increase in the level of generation compared to the previous compliance period. EPA claims that the purpose of this set-aside is to align the incentives for existing units covered by the Clean Power Plan with new units that are not subject to the mass-based limits of the state plan. This, EPA says, will help to avoid emissions leakage to new units and to encourage the increased generation at existing NGCC units that is built into the targets under Building Block 2.

EPA has capped the size of the output-based set-aside at the number of allowances that each state would be eligible for if all existing NGCC units were to increase generation to a 60 percent capacity factor compared to their 2012 baseline. This cap is calculated once and is held constant throughout all compliance periods, which means as the mass goals decrease over the compliance period, the output-based set-asides will make up an increasingly larger share of available allowances. If, due to the cap, there is a shortage of allowances available to eligible NGCCs, the allowances will be distributed to each NGCC on a pro-rata basis. Any leftover allowances will be returned to the historical generation pool and distributed to all covered sources.

Renewable energy generators that are eligible to produce ERCs (i.e., on-shore wind, solar, geothermal, tidal, or hydro units built on or after January 1, 2013) are eligible to receive allowances from the renewable energy set-aside. EPA proposes to set aside 5 percent of a state’s allowance pool in an account from which developers of qualified renewable projects could apply to receive allowances based on the projected generation from their projects. These allowances are allocated prior to each compliance period. The renewable project must be located in the mass-based state for which the set-aside has been designated and would not be eligible to produce ERCs in a rate-based state even if the project were electrically connected to the rate-based state.

Distribution of allowances based on historical generation

After set-asides have been calculated, EPA proposes to allocate the remaining allowances in the state’s emission budget to existing sources based on their performance over the 2010-2012 period. First, the average annual generation during this period for each unit is determined. If a unit did not generate in one or more of these years, that year is thrown out of the average (i.e., only non-zero values are considered). If a unit was under construction during this period (or did not yet exist), the average generation is calculated using the capacity factors used by EPA in target setting. Finally, a pro-rata factor is calculated for each unit by dividing that unit’s historical generation by the total historical generation from all the units in that state. Each unit’s pro-rata factor is used to determine the quantity of remaining allowances distributed to each unit in the state in compliance years.

What happens if a unit retires?

If a unit retires or undergoes significant modifications to the point that it is no longer considered an existing unit covered by the Clean Power Plan, it will still receive allowances for a limited time. Based on the timing of the retirement (within the calendar year and the compliance period), retired units may receive allowances for up to four years post-retirement. EPA sees this approach as a reasonable compromise between indirectly incentivizing otherwise uneconomic units to keep operating by taking away allowances immediately upon retirement and giving away allowances to units that are no longer emitting. After this limited period, allowances that would otherwise be allocated to retired units are instead added to the renewable energy set-aside allowance pool.

What happens if a unit emits more CO2 than the allowances it holds?

In addition to being subject to civil penalties under the Clean Air Act, non-compliant units must forgo two allowances in a future compliance period for every one allowance not surrendered in the prior period. Deducted allowances are held by the EPA and are not re-allocated to other generators.

States that work together, either through the development of a joint plan or by “linking” with other mass-based states as described above, can establish interstate mass-based trading programs. An allowance distributed in one of these states could be used for compliance by a generator in any of the other states. EPA believes that the larger the mass-based trading region, the more effective and affordable compliance will be. Therefore, under the final Clean Power Plan, units in mass-based states can use allowances obtained from other mass-based states for compliance as long as the allowances are properly tracked and the states are “linked” in some way. This linkage could be accomplished by using one of EPA’s “ready-for-interstate-trading” plans or by separately identifying bilateral or multilateral links with other states in their state plans.

All states subject to the mass-based federal plan will be able to trade allowances with other states under the plan. In addition, states that adopt the mass-based model rule can trade with each other. One simple, straightforward way states can broaden the scope of their interstate allowance trading program is to adopt EPA’s model rule and link to the federal mass-based trading plan. In the model rule and proposed federal plan, EPA lays out the conditions a state plan would have to meet in order to link to the federal trading program:

If these conditions are met, a state can link with the federal trading program and units in that state can use allowances from any other state that is under the federal plan or similarly linked to it.